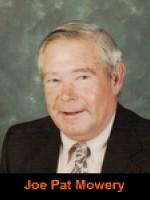 If anyone ever “bled orange and black,” it was certainly Joe Pat Mowery, a 1953 graduate of Dumas High School. As a product of Dumas, he was first recognized for his ability to set records for the Demons on the football field as a Dumas High School student athlete. But that was just the beginning of his Demon legacy.

After a year in college and two years in the military, Mowery retuned to Dumas to settle into life and raise his family. He was a driving force in the Babe Ruth leagues, but it wasn’t enough. He returned to college to get his teaching credentials – molding children through athletics. And this became his life’s work as so many lives were touched.

As much as Mowery loved sports, he loved students more. He was devoted to helping students to be successful and to learn the important life lessons that team sports teach. As he moved from coaching to administration, that devotion did not waiver. Making model citizens through all the facets of public education was his goal.

Jo Pat Mowery built relationships with people, in school and out. He “coached” students to be the best they could be in whatever endeavor they participated in. He defined devotion to school and community through his involvement in programs that grew children into good people. He lived the motto that “Demon Pride Never dies.”